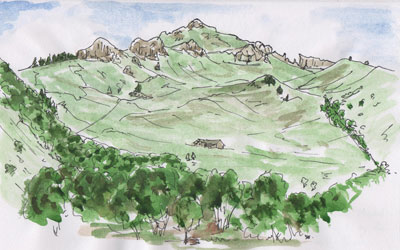 The offer of a small site, managed for wildlife, with only a few pitches and basic facilities attracted (mostly family) campers who fell in love with the place and enthusiastically participated in the informal activities designed for mixed age group that were offered.

These included making pottery from their soil, learning about other countries, cultures and ecology (from Steve and Irene’s own experiences), carving local wood and making jam from their hedgerows.

Over time it became clear that this kind of experience was not widely available and so the idea for a network of locations was born. They secured a small grant to trial the concept to see whether it was viable.

The initial market research met with great enthusiasm from many quarters and lots of useful feedback was gathered to help guide development of the idea.

In the summer of 2013 a trial was carried out in Wales with campers visiting Nearly Wild Camping locations (activities were not formally offered at this stage).

The 44 campers and 22 locations that applied (through promotion at a single event and our new Facebook page), demonstrated the demand that was out there.

Particularly useful in finding our way forward was visiting some of the 12 locations who actively participated in the trial. 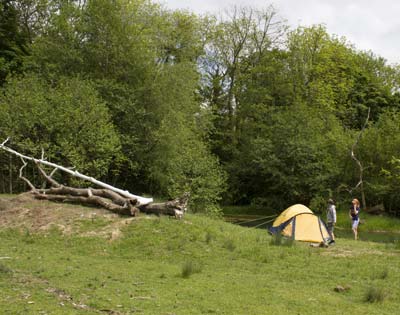 The quality of the locations was so impressive and the owners were so onboard with the wider concept (beyond just a place to sleep) that they really helped to define what this concept had to offer beyond the opportunities already out there and also to confirm the support and desire for a shared learning and support network from location owners.

There followed an autumn of strategic thinking, business planning and dreaming, which is now bore beautiful fruit in this website, with increased functionality and with our formation as a co-operative in May 2014.

Since then we have been growing steadily and getting the word out there, talking to other organisations about the possibility for collaborations and learning through experience what does and doesn’t work. From these learnings we have recently made a few changes to how the website and booking works, which will hopefully make everything run more smoothly.

Being a co-operative demonstrates our vision of being a collective and investing any profits back into the organisation or in seed funding other initiatives.

Find out how you can make Nearly Wild Camping come to life.

add yourself to the email newsletter